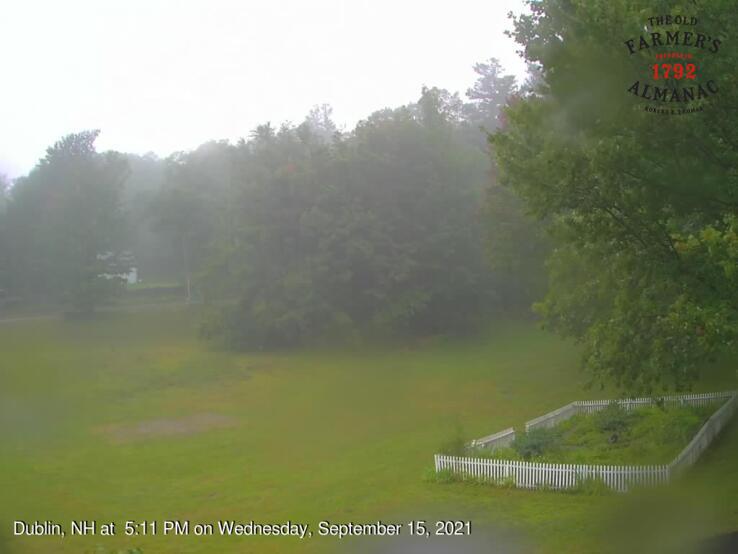 Use the slider or buttons below to view the last 24 hours of webcam photos.

Our webcam is mounted at our headquarters in Dublin, New Hampshire, on the side of the Thomas Building, named for the founder of The Old Farmer's Almanac, Robert B. Thomas (editor from 1792 to 1846). Our accounting, circulation, and information services departments are located in this building. The small photo at the right shows the webcam mounted on the side of the building. The webcam image is updated once a minute.

Sagendorph Building — The red building on the left is the Sagendorph Building, part of the headquarters of Yankee Publishing Inc., publishers of The Old Farmer's Almanac and Yankee magazine. The building is named for Robb Sagendorph (Almanac editor from 1941-1970), founder of Yankee magazine and the 11th editor of The Old Farmer's Almanac. The portion of the building in view dates from 1805. Several construction projects undertaken between 1964 and the present have added a considerable amount of office space that is out of view of the camera. You can see a drone flyover of the building here.

Yankee Publishing Parking — The parking lot in the center of the frame is used by the employees of Yankee Publishing and, occasionally, Dublin citizenry. You might see a fire truck or water truck on the far right, as the Dublin Fire Hall is located next door.

Sun Sculpture — This sculpture on the lawn between the two halves of the parking lot actually casts a shadow on the inside of the rings to indicate the time. This armillary sphere is all that remains of a sculpture garden originally constructed in the 1950s.

The Dublin Town Hall — This large white building immediately across the street was constructed in 1881, and is the seat of the local government for the Village of Dublin, New Hampshire.

The 1493 House and Worcester's Garage — To the left of the Town Hall, (not visible) the Dublin Police Department occupies a small building, the 1493 House, indicating the highest elevation (1,493 feet above sea level), of any village center in New Hampshire. The next white building, to the left of the Town Hall, was formerly Worcester's Garage. It is now the home of AVA Restoration Services — a BMW service specialist.

This view of our backyard in Dublin, New Hampshire shows the John Pierce Memorial Garden, watched over by a maple tree. The garden was dedicated in August 2008 to our long-time editor, publisher, and friend, John Pierce.

The garden was first created as an Old Farmer's Almanac Anniversary Garden in 1992 to celebrate 200 years of publishing the Almanac. The flowers and herbs that were planted were beloved by gardeners at that time. A daylily (Hemerocallis fulva) from the John Pierce Memorial Garden.

Some of the many flowers and herbs that have been planted in our garden are: hollyhock, rose, tansy, daylily, iris, blue bell, peony, false indigo, wormwood, speedwell, candytuft, columbine, lupine, chives, thyme, lavender, spearmint, and rosemary. The garden is home to a variety of pollinators, like this bee visiting a False Indigo (Baptisia australis) flower.

It's a typical front-yard parlor garden, a scaled-down version of the more elaborate English manor garden. The parlor garden was used mostly for flowers and herbs and marked the first formal separation of flowers and vegetables in the gardens of ordinary people. It quickly became popular, especially in New England.

The parlor garden usually ran the full width of the house and extended toward the road. It was always fenced, both to maintain privacy and to keep out animals. There was almost always a gate at the entrance. The paths in the garden were surfaced with gravel or (near the coast) clamshells.